From goat meat and herbal tipples to robot chefs and kitchen smartware: we predict how you’ll be eating and drinking your way through 2017. 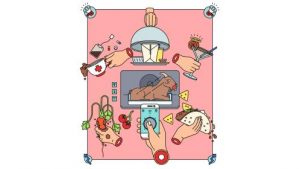 Gourmet Delivery
Among the niche companies taking on the big players such as Just Eat, Deliveroo and UberEats are Zing Zing, a Chinese-delivery business that’s MSG-free, Homeburger, a high-quality burger that’s designed to travel, and DropWine, a central London service that will deliver booze within an hour. The sharing economy is also getting in on the act: Trybe is a new service selling home-cooked food from budding local chefs. FA

Superteas
Look out for supersmart teas this year. Bags infused with painkillers and antacids to counteract hangovers are being developed, and Tetley has launched a blend with vitamin C to support the immune system. Brewfull, a new company, has also started a range with soluble pea fibre to suppress the appetite. CSW

Shopping goes hyperlocal
The Food Assembly, a hybrid of farmer’s market and a veg-box scheme, allows you to shop and pay for what you want online. The producers — who come from within a 30-mile radius — then pick or make only what has sold and deliver weekly to a collection point nearby. There are currently 65 assemblies operating in the UK, with 200 forecast by the end of the year. SQ

Smart kitchens
Life in the kitchen is about to get truly clever: GE’s smart kitchen island has touchscreens to guide you through recipes, while the Samsung Family Hub fridge works with an app to order groceries. Other smart kitchen appliances on sale include stovetops and ovens that integrate with extractor fans. And if you can’t be bothered to cook, Moley will this year install the world’s first robotic kitchen in Europe, where a robot chops and cooks dishes from a library of recipes. CSW

Goat on the menu
This delicate, musky meat is on the up. Sales at Cabrito, the UK’s main supplier, increased by a third last year. Impressive health credentials add to its appeal: it’s lower in fat than beef or pork and rich in potassium. Sager + Wilde in east London threw a goat taco party last summer; it’s on top menus, too — from Romy Gill’s pulled shoulder to kid offal terrine at St John. RW

Softails
Teetotalism will be a breeze this year, with Seedlip’s new nonalcoholic spirits and Botonique’s alcohol-free fizz introducing herbal options. The hottest bars leading the booze-free charge include the Savoy’s American Bar, whose jubilee sling contains pine-infused apple juice, camomile syrup and rose soda, and Dandelyan, which serves the wild thing — a mix of Seedlip Spice 94, ylang-ylang and herbal tonic. All the flair and flavour without the headache. RW

High-end tacos
Critics and chefs in the UK have been excited about Mexican food for years, but the most popular offerings are still chain-restaurant cheesy burritos. Properly done tacos will change that. The Hart brothers have just opened El Pastor, in Borough Market, where they make their own tortillas on site, while Corazon, a 10-taco taqueria, has launched in Soho, with fillings such as confit of duck in root beer. FA