A tin of Baxters tomato soup is loaded with more salt than a Big Mac and large fries according to a new study that found that major brands are failing to slash the salt content of their foods. 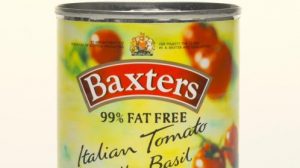 There has been a “shocking” rise in salt levels in household foods such as tinned soup, cheddar cheese and ready meals, research from the Consensus Action on Salt and Health (Cash) found. Nearly half of the 45 soups examined contained the same level of salt or more per serving than two slices of Domino’s cheese and tomato pizza.

Baxters vegetarian Italian tomato and basil soup, with 3.5g salt per 400g can, was the worst offender. A McDonald’s Big Mac and large fries has just over 3.1g.

About 55 per cent of the products contained the same amount of salt or more than in 2010, a figure campaigners blame on the government making the food industry responsible for policing themselves.

Soups with some of the biggest increases were Tesco Everyday Value tomato, which increased by nearly half to 0.6g/100g, Baxters Favourites cream of tomato, which rose 40 per cent to 0.7g, and Sainsbury’s Basics cream of tomato soup, which increased by a quarter to 0.6g. Salt in ready meals had more doubled in some cases and increased slightly overall. The average salt content in cottage pie ready meals rose from 0.52g/ 100g in 2007 to 0.54g this year.

Cash looked at the salt content of hundreds of blocks of cheese and found that salt levels have increased from 1.75g/100g in 2006 to 1.78g this year. All but three of the cheeses were so salty that their packaging was marked with a red label. Some breakfast cereals have become unhealthier, with salt content in Sainsbury’s cornflakes rising by 40 per cent to 1.05g/100g. Kellogg’s had the most salt of all cornflakes surveyed.

Graham MacGregor, a professor at Queen Mary University of London and chairman of Cash, said: “It’s imperative that responsibility for nutrition be handed back to an independent agency where it is not affected by changes in government, ministers, lobbying and pressure from the food industry.”

Separate research by Cash published at the weekend revealed high salt levels in sandwiches and pastries at café chains. A Starbucks croque monsieur panini contained 3.1g of salt while a brie and bacon panini at Caffé Nero had 3.2g. Both were more than half the daily recommended salt intake for adults.