Home  »  Kitchen Stuff   »   The kitchen that can think for itself

The modernist designer’s motto “form follows function” may have been born long before anyone had heard of the world wide web, let alone ovens and dishwashers that talk to each other. 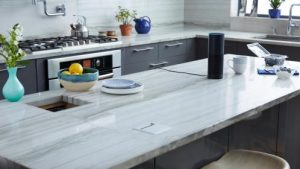 The Amazon Echo gadget on this kitchen bench responds to voice commands, such as asking it to order a takeaway

Yet at this month’s IFA, the world’s leading trade fair for consumer electronics, kitchen companies were hijacking the phrase to launch their most technologically advanced ranges.

Brands such as Grundig, the German electronics manufacturer best known for its retro radios, are embracing smart technology and apps to reinvent simplicity in the kitchen of the future.

Take Grundig’s “VUX”, short for Virtual User eXperience, which Ragip Balcioglu, the chief commercial officer of Arcelik, which owns Grundig, says will be released next year. It uses intelligent projection technology to transform an induction hob into an “intuitive work surface”. Rather than knobs and hob tops ruining the clean lines of your kitchen, you project the control buttons on to a bare induction surface and place your saucepans anywhere you wish.

Other innovations, at the conceptual stage, take advantage of the “internet of things” to make homes more efficient. Grundig’s proposed cooling oven allows you to refrigerate your food in the morning, and later, using an app on your phone to turn on the heating function, the oven will warm up so that by the time you get home your dinner is ready to eat.

Freshmeter technology includes a smart food sensor that detects changes in food, alerting you via your phone if your groceries are going off. Hakan Bulgurlu, the chief executive of Arcelik, says: “We have been working on connected household appliances, addressing what consumers want from their devices.”

Last week’s introduction of Amazon Echo, the household gadget that responds to voice commands asking it to play music or order a takeaway, is also being used by manufacturers to enhance kitchen appliances, including LG, whose SmartThinQ range is compatible with Echo. Hoover’s Wizard wi-fi-enabled products can also be operated by voice commands. Its new washing machine comes with a phone or tablet app that helps you to choose the wash cycle best suited to your clothes. Hoover’s Wizard oven app will help you to choose the cooking programme best suited to what you are rustling up.

Indigozest, a smart home automation specialist, expects to see a trend for fridge cameras this year, where real-time images of the contents of your fridge are sent to your phone so you know what to pick up from the supermarket on the way home. Samsung’s “Family Hub fridge”, the two-door fridge-freezer version, is one of the first to have “inner view” cameras that take photos of refrigerator contents each time the doors close.

So far, all of this new kitchen technology requires human input, but within the next “three or four years” we will be able to buy appliances that can think on our behalf.

Mark Skilton, a professor of practice at Warwick Business School, says: “Expect to see more hands-free appliances and artificial intelligence being used. Data usage patterns will become automatised, so you don’t even have to speak to the machine.” Essentially it will start to “think” on your behalf, having learnt about your likes, dislikes and daily routine through garnering your personal data.

LG says its SmartThinQ washing machine, for example, will eventually include a sensor that reorders more detergent when it runs out through the Amazon Dash programme. Grundig is working towards similar functionality on its dishwashers.

Legrand provides home networks and says it is moving towards a fully automated home.

Amazon is keen to get across that its Echo device is merely recording what you tell it. Still, it is gathering a huge amount of information about your likes, dislikes and movements. “Micro-location data, usage data, personal consumption habits — you can get quite a personal, rich picture of somebody by their usage data and this raises the question of inference,” Skilton says. “Laws are not yet ready for this and we need to make sure people are able to decide if and how they want to be evaluated.”