Dieters who snack while walking tend to go on to binge on unhealthy food, a pilot study suggests. 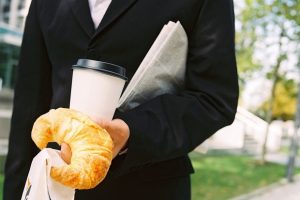 Researchers said that eating while doing gentle exercise appeared to make people on diets feel less inhibited so that they went on to eat significantly more junk food at the next meal.

Taking a snack while on the go seemed to lead dieters into a “trap of mindless eating”, the scientists said. Dieters failed to track or recognise the food that had been consumed.

Psychologists at the University of Surrey recruited 60 women with an average age of 24 and gave them a choice between summer fruits and chocolate fudge cereal bars.

They asked 20 of the participants to eat their bars while watching a five-minute clip taken from the television series Friends. Another 20 had to talk about their holidays or career ambitions while they ate the snacks. The remaining 20 were asked to walk alone down a corridor while eating.

The women then took a “taste test”, in which they could eat as much as they liked from bowls of grapes, carrot sticks, chocolates and snacks.

In general, it appeared to make little difference whether the women were on a diet or if they had watched TV or talked to another participant.

Among the women who snacked while walking, however, dieters ate more food in the taste test than those not on a diet. In particular, they ate five times as many chocolate sweets.

The scientists said that they had little idea why eating while taking a stroll should make dieters snack more than eating while watching TV or socialising. Previous studies have suggested that people consume more and feel less full if they eat while being distracted by a range of tasks, including playing a computer game and listening to music.

An Australian experiment published this year found that women ate more in a McDonald’s diner when they were talking to other women but men ate more in mixed-sex groups.

“It is not clear why walking should be more distracting than either watching TV or social interaction,” the researchers wrote in the Journal of Health Psychology. “Perhaps this relates to the embarrassing nature of the condition due to its novelty and a sense of being watched by others.”

Five minutes of ambling along a corridor does not seem to burn enough calories for the exercise to explain the difference — but the smug feeling of having done some form of exercise might serve as an excuse. The academics suggested that a sense of “legitimation” after their walk might have driven the dieters’ fingers deep into the bowl of chocolates.

“Perhaps it is not the degree of exercise per se that affects food intake but the meaning ascribed to this exercise,” the researchers wrote.

They suggested that the need for exercise was important for the dieters, who then believed that since they had been active, their subsequent overeating was justified.

The scientists wrote: “This may also help to explain why over-eating in the taste test was particularly apparent in terms of [chocolate] consumption, as once justified in eating more due to their perception of having undertaken exercise, those who tend to restrict their food intake may select to overeat the very foods which are most often denied [to them].”