Eating food used to be a straightforward business. You felt hungry, you made a sandwich, you opened your gob, you shoved it in: end of. But what fools we were; how little we knew. 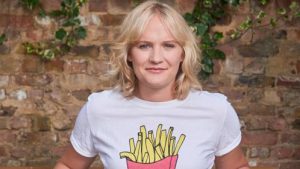 Food, it turns out, is not fuel to keep you alive. It is an entire belief system, a lifestyle accessory, a way of signposting that you are on a higher spiritual plane than other mortals.

This is achieved by photographing your virtuous meals, containing expensive ingredients from niche shops, posting them online and adding a wall-punchingly smug comment such as: “Such a treat to re-energise wholesomely after a great workout at the gym. #lowcarb #delicious #detox #eatclean #yum.”

The clean-eating brigade lead the way in what Nigella Lawson calls “food to self-congratulate”, but now they are ripe for a whipping. This comes in the splendid form of Bella Younger, or to use her comedy character’s name: Deliciously Stella.

Stella is a parody riposte to the righteous foodies, mostly (although not all) white, middle-class, attractive, privileged young women who never seem to be on a sweaty Tube or queueing at Lidl. Instead they photograph their perfect salad lunch in their beautiful kitchen before calling themselves “blessed” and adding an insufferable hashtag such as #gettheglow.

Although she deftly mimics their self-satisfied tone and terminology, Stella is their skanky antidote who eats nothing but junk, advocating “yummy” coconut water (Malibu), crispbread (crisps on white bread) and “summer fruit salad” (fruit gums, gummy strawberries and other sweets “foraged” from her local pick’n’mix). Her six-pack is a multipack of lager or six Fab lollies taped to her abdomen.

Younger is careful not to be outrightly cruel because she knows that would be less funny and turn people off. The name is obviously a spoof of Deliciously Ella, the clean-eating blog by Ella Mills (née Woodward), but Younger says this isn’t one she draws on for material; the name Deliciously Bella had already been taken.

It helps that Younger is rather posh. Her real name is Arabella, she’s originally from Edinburgh, and she went to Downe House, the boarding school in Berkshire whose former pupils include Miranda Hart and the Duchess of Cambridge, where Younger was the “class clown”.

Her grandfather was George Younger, who served in Margaret Thatcher’s cabinet as secretary of state for Scotland and who later was chairman of the Royal Bank of Scotland. “I did my dissertation on the decline of the Tory party in Scotland,” she says, “and I remember . . . finding an amazing quote in a book by Andrew Marr that said my grandfather used to try and get round Margaret Thatcher by offering her custard creams.” She may hail from a family of Scottish Tories (her uncle, James Younger, sits in the Lords), but she is herself left-leaning, although she says that her family laugh and say: “You’re the worst lefty ever.”

When she moved to London, she initially worked in television and says that even at the BBC she had the poshest accent, although she was trying “so hard to be trendy”.

Once, a producer came up and said: “Bella, are you around this weekend? We really need someone who can shoot.” Younger replied keenly: “Yes, my dad’s got an estate in Scotland.” The producer fell about laughing. “I meant ‘can use a camera’,” he said.

This story, which Younger says left her “mortified — I’ve never been so embarrassed in my whole life” — has become part of TV folklore. Indeed, she does another comedy act, Champagne Socialist, which is based on her experience of the phenomenon of “poshos” like her moving to east London and making it “less cool”.

Her “recipe” book is itself, of course, a parody of those books and blogs that genuinely don’t seem to realise how smug they sound as they chart their “food journey” (ugh) and never-ending quest for “wellness”. Her avocado on toast is guacamole topped with Haribo eggs. She “cuts carbs” by literally cutting carbs — a white loaf — with a bread knife, but with the self-satisfied drawl you see in foodie video blogs, and “locally sources” her ingredients from the corner Spar.

She satirises the credulous belief in expensive “detoxes” and “juice cleanses”, which scientists have long dismissed as bunkum because your kidneys and liver do the job on their own perfectly well. The book contains little aphorisms that nod to this pseudo-science, such as “Listen to your body, not your doctor”.

“I may not be a scientist,” Stella writes breathlessly, “but I think I know enough about modern medicine to know that it is obsolete. From working closely with my mum’s nutritionist, who has a GCSE in science and has done a course, I have learned there is no illness that can’t be cured by changing your diet. If cleansing your colon with a daily purple juice makes you feel good then it’s likely it can cure cancer as well.”

She’s very funny on the obsession with arranging things in bowls, particularly “abundance bowls”, which I had never heard of but are apparently a thing. “My agent told me about them,” she says. “They’re big in Australia. The idea is that it’s abundant with good health, but mine are abundant with white carbs and sweets.”

It was the parody Instagram account that initially gave birth to Deliciously Stella last year. Younger had noticed there was a plethora of young women posting pictures of themselves on exotic beaches in bendy yoga positions, taking part in what increasingly seems to be a social media perfect life competition.

She says she thought, “Why is everyone on a beach all the time? Why are you not at work?” and says in real life no one looks like that on beaches — they look sweaty and hot and burnt, yet here’s someone “gracefully arching themselves into some bizarre contortion. Lie down! Read a book! Have a cocktail!”

The idea was to document her being generally “gross” in her day-to-day life, being hungover and eating Peperami, while cooking with her deep-fat fryer. She noticed the style of clean-eaters’ blogs and posts, how everything ends with a question such as “What do you do to stay fit?” and how expensive this food is, as if everyone can afford it, or just pop down to Neal’s Yard for an organic brunch at 11am.

Davina McCall and Jamie Oliver are among people who got the joke and tweeted enthusiastically about it, which helped the account to take off like a rocket. Now she gets recognised in the street. Someone recently came up to her in a nightclub and said: “Don’t take this the wrong way, but you look like Deliciously Stella.”

It irritates her that it’s considered “bad” or “dirty” eating to have, say, a Mars bar. “Never,” she says, “trust a person who considers fruit a pudding.”

Yet is her diet terrible in real life? “My diet is quite normal,” she says with a smile. “I did have Hula Hoops for supper last night, but that’s not an everyday thing. I’m like anyone else; I’ll have days when I literally eat the entire fridge and others when it’s, ‘Oh, I might have a salad for lunch.’ I eat every single thing in [the book], but not all the time.”

She notes that it has become trendy to eliminate entire food groups from your diet and obsess constantly over food. “I think there needs to be a different way generally in the way we approach food. Everyone takes food so seriously, but it’s really fun.” Indeed, some people haven’t quite got that Stella is a joke and accuse Younger of promoting unhealthy lifestyles. Sigh.

She wants to make it clear that she doesn’t hate the clean-eaters, she just saw the comedy potential in them. In fact, she met one, Clean Eating Alice, “and she was so lovely. She buys normal ingredients from her local supermarket. [Her stuff] is easy to make and affordable to buy. That’s the sort of healthy eating I can get on board with. I’m not some crazed denier of stomach troubles . . . if people want to lead a healthy lifestyle, that’s great. But don’t be po-faced about it. Everybody needs a LOL.”

Many clean-eaters follow her on Instagram, which she’s glad about, but says: “I do wish they hadn’t made pizza out of cauliflower, though.”

Stella is such a timely character, she seems destined for bigger things. Younger has an idea for a sitcom that satirises the new gentrification of certain areas and in which everyone wants to be a vlogger or an Instagrammer.

“Wellness is the perfect setting for the new Ab Fab,” she says. “It’s almost the new fashion world. Millennials are more interested in meeting up at yoga classes than they are in going down the pub.”

It’s an astute observation that I imagine will have comedy commissioners salivating. In the meantime, though, she’s focusing on her new parody book. You may not want to make any of the mad recipes in it, but it’s definitely nourishment for the soul.