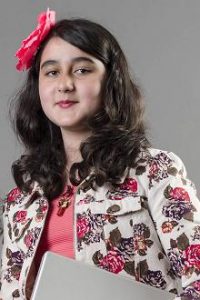 At first, my mum used to complain about how much time I was spending on the computer,” says 12-year-old Ophelia Horton from London, a fashion blogger with 5,000 hits a month and one of Grazia magazine’s “Ones to Watch”, “but I still get straight As at school.” Her mother Karen Lane says: “I wasn’t that keen and didn’t pay much attention for the first six months. Now I’m really proud. In writing it, Ophelia has found her own voice.”

This generation of children is the first to know more about technology than their elders. Three in four children have their own laptop or PC; one in three said it was “the single thing they couldn’t live without” in a survey by market research agency ChildWise this year. Perhaps most surprisingly, the same survey also revealed that 30 per cent of 5-to-16-year-olds have a blog. Parents are used to their children being far more proficient on the computer than they are. But having their own blog, revealing their thoughts to a potentially worldwide audience — doesn’t that take technology to a whole new level? According to Ophelia, it’s just like any other hobby — and one that might even make money at some point.

“My older sister is amazing at dancing and music — and now I have this blog, I don’t feel so bad about it,” she says. “I have my own passion that I’m talented at. My mum did suggest keeping it to one hour a day, but it takes as long as it takes.”

“The need to express ourselves, and for that need to be met, is very important,” says clinical psychologist Dr Cecilia d’Felice. “A child that is able to self-reflect is a child that is going to go far in life. There is nothing wrong with the process of examining issues and describing them — for me where it gets complicated is that the internet is a public forum. Parents need to help the child ensure the subject is appropriate to the audience.

“And I wonder how many of that 30 per cent of children kept their blog going? As with anything else, I think the child should demonstrate some form of commitment before the parent gives them their reward. We start to write coherently from the ages of 8 or 9 — I think a blog before then would be ridiculous — so perhaps see if your children can write several interesting paragraphs in a notebook before committing to a blog.”

Maelo Manning, 12, from London, has been listed as the seventh most influential child blogger in the world for her politics blog. “When you’re a child, it can be quite hard to feel involved with politics — but having a blog and being on Twitter makes me feel like I’m part of that world.”

A blog is a way of focusing a child’s interest, says Nick McGowan-Lowe, father of Jake, 10, from Perth and Kinross in Scotland. After finding a rabbit’s skull on a local hillside when he was 7, Jake started blogging on bones and now gets 8,000 hits a month from collectors, curators and forensic scientists. “He has stuck at it and done exceptionally well,” says Nick, who is not a bone enthusiast himself. “He gets a thousand e-mails each year, plus umpteen comments on his Facebook page and his blog. I see them first. As a parent you worry a bit, but in practice it has been very safe.”

But how do these kids cope with rude comments online? They take it in their stride, it seems. Political blogger Maelo says she has had “a few horrible comments online, saying that I didn’t write it myself and that my parents wrote it. That’s offensive. I write everything on my own — my mum just does a spell-check!” While according to fashionista Ophelia: “There have been mean comments from haters, saying I have no style and my blog is crap. The first time, I was really peed off.

I deleted it, then did a whole blog post saying I didn’t care about those opinions.”

And this kind of internet interaction is also a stepping stone into the professional world. Stefan Kelly’s blog on South American football and his Twitter account have gained 10 000 viewers. As a result, the 15-year-old from Dublin has become a columnist for several online football sites. “At first I thought he might have been doing a ‘cut and paste’ but soon realised it was all his own research and writing — and it was surprisingly good,” says his dad, Gerry. “I have to admit, I learnt a lot from him. Research and writing ability is one thing but being able to develop a co-ordinated blogging and Twitter profile to break into a very specialist area doesn’t happen by accident. And how else would a 14 or 15-year-old get an opportunity to be published on the world stage?”

“It’s very important to learn from your children,” says Dr d’Felice. “We have to challenge the Luddite in all of us. If you want young people to accept your ideas, you’ve got to show that you are open to theirs. Children are very good at saying ‘this is fascinating, look at this’. You’ve spent all this time feeding them materially, emotionally and intellectually — let them feed you back.”

I started the blog because I was interested in fashion, obsessed with Top Shop and couldn’t afford any of the stuff. It was a fun way of talking about clothes. As it progressed, I learnt more about personal style and inventing my own fashion instead of following everyday teenage stuff. Now it has spread beyond fashion to photographers, artists and anything I like.

At London Fashion Week, I saw the fashion writer Susie Bubble — one of my favourite bloggers of all time. I was wearing a collar I’d made from the Miu Miu Spring Summer 2010 collection. I’d printed off the motif and glued it on. Susie took a picture and put it on Twitter. That day my blog got 800 hits and after that I started getting lots of attention. I now get about 5,000 hits a month.

Mum has asked me not to swear on my blog — but teenagers swear and you have to deal with that. I think 12 is a good age to start blogging. So much is changing — it’s a good way to stabilise everything.

I love bones because they’re unique, one of a kind. It started when I was 7, walking home from kids club with my dad. We found some rabbit skulls, so I picked them up and took them home. After that, we found a roe deer skeleton in an old estate nearby. When I asked Dad if I could start a blog about them, he said yes, but only if I put in the time and effort every single weekend.

Now we go out walking looking for bones early in the morning on Saturday or Sunday, and write up a post every Friday.

I’ve got more than 1,000 bones in my collection on shelves in my room. Also, people send them to me because of my blog. A gamekeeper in the Highlands sent us his amazing collection in a biscuit tin — addressed to “The Animal Bones Man, Jake McGowan-Lowe, Braco, Perthshire”. There was a short note inside saying, “Time to get rid of them before relatives put them in the bin”.

There was a badger, a mole, a hedgehog, a buzzard, a kestrel and, amazingly, a golden eagle.

I get about 5,000-8,000 visitors to the blog every month. I’ve had VIP tours of museums and I was contacted by a famous professor at the Centre for Anatomy and Human Identification, who found my website and let me use her beetle tank, which gets all the flesh off the bones without damaging them.

Some people just say they like my blog, others ask for advice. I like it when they say nice things, but it’s even better when I can actually help them.

My parents are Liberal Democrats, and during the 2010 election our home was a campaign base. I like the party because it’s in the middle — not too left and not too right. As the election got closer, we started getting really excited — and one night, I was so excited I couldn’t sleep. At 3.30am, I told my mum I wanted to start a blog. She said: “Why not do it now, since we’re up!”

I’ve recently posted about Bob Diamond, and I’m campaigning on the closure of Remploy factories, which employ disable people. The Lib Dems have been very supportive and let me speak at their conference five times and other Lib Dems have featured me on their blogs. I want to study PPE at university, then go into ethical investment banking. After that, I’d like to be a politician but maybe not a senior one.

I wouldn’t be able to subscribe to the neoliberalism that dominates the world markets and I’d find it hard reconciling the job cuts and spending cuts you’d have to make with my Christian faith. Whatever happens though, I’ll always be blogging!

I wrote a newspaper-style article for school on the sinking of the Titanic.

I really enjoyed it, and came home and asked Dad if I could write every day so he suggested a blog. I decided to do one on school dinners partly because I have a school dinner every day and also because sometimes they weren’t big enough.

When I first posted, I thought my grandparents and aunts and uncles would read the blog if I asked them to — but when I woke up next morning, Dad told me that 25,000 people had read it!

Lots of things have happened since. Jamie Oliver posted on it, which was really nice because he was kind. We were in the news and we were invited to Hollywood and lots of other places.

Her blog, Never Seconds, has raised more than £111,000 for Mary’s Meals, which provides school meals to children in Malawi and other countries. We’ve raised enough to build a kitchen and I’ll call it the Friends of Never Seconds Kitchen because so many people have helped.

When I was told by my school that I wasn’t allowed to photograph my dinners any more, I was surprised because I only write my blog, I’m not writing for a newspaper or anything. Now the council have changed their mind so I’m glad I can finish to the end of term.

I’ll blog from Malawi too — that’s going to be amazing!

I love its unpredictability, which you don’t get so much in Europe where wealthier clubs tend to dominate. I also love being able to see some of the best young talents in their early years, before they make big-money moves to the biggest clubs all over the world.

It’s incredibly easy to start a blog. I didn’t need any help — I just used the website Blogger. I post on upcoming games, profiles of players, or anything else I think is interesting. I do as much research and take as many notes as I need, then write as little or as much as I feel is necessary to make it as good as possible.

Viewing figures weren’t really on my mind at the start but build up was quite quick because of Twitter. Now I’ve had more than 10,000 readers from all over the world, with a lot coming from regions I’ve written about. I’ve been asked to be guest writer for football websites, and a columnist for another.

It has put me in contact with a lot of successful football writers whose knowledge is incredible.

No age is too young to blog and I think most children would only get positive experiences from it. In more than a year, I’ve never had any dodgy approaches from people unknown. I play football, too, with my local club at an admittedly average level — but my ambition, of course, is to be a professional football writer. Hopefully, starting early will improve my chances.