How to grow old in style: build a cool, hi-tech, eco-friendly house in the garden of your old place and ask your son to be the architect. 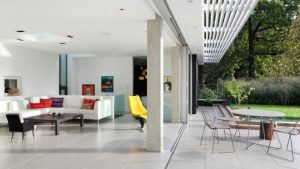 For almost 25 years, Philip and Caroline Cooper lived in The Pagoda, a grade II listed, oriental-style mansion in Blackheath, southeast London. “But it was too big once the children left,” says Caroline, an interior designer whose three offspring now have five kids of their own. “And for years we’d been hankering after a modern house,” says Philip, a retired architect.

So, in the summer of 2014, they sold their palatial home (family houses near the heath fetch around 2 million) and – in an unusual move – migrated to the bottom of the garden.

The couple had started discussing a change five years before. They wanted a house where they could grow old together, somewhere highly functional for when they are “even more decrepit”, says Caroline. But rather than take on the project himself, Philip enlisted his son Sam, who runs E2 Architecture in London.

“The brief was to design us a very modern, practical home that is cutting edge and environmentally friendly, but without straw bales and windmills,” says Philip. Sam designed a four-bedroom eco bungalow in the gardens of The Pagoda. They loved it, but obtaining permission was going to be tricky.

Two parties objected to their plans: the wealthy owners of a group of six nearby houses (“City workers and lawyers writing emails with not much fact,” says Philip) and the residents of 80 or so homes on a local estate, who were worried about the loss of two parking spots. The Coopers paid for three new ones.

Once they had the all-clear from English Heritage, the Georgian Group, the Blackheath Society and all their neighbours – a process that took almost two years – they started to build their new home in the autumn of 2011.

The open-plan design centres on a vast, glass-walled living area, with a lower level that follows the natural drop in the land and swings round to catch the southwesterly sunlight.

The glass walls can fully retract and the grey floor tiles run flush from inside to out; on the outside, though, there is no grout, so that rainwater can be collected and pumped back in. “If it rains the water is a peaty yellow, so when you flush the loo it looks worse than when you started,” says Philip.

With apps on our phones, we can close the blinds all the way from our house in Avignon

The Pavilion, as they call it, is a zero carbon house. It generates more energy sustainably on site than it uses. There are photovoltaic panels on the roof and the exposed concrete columns act like heat stores that release warmth very slowly.

By every door there is a discreet digital panel that controls the light, temperature and ventilation of each room. All of this can also be controlled via apps on their phones.

“We can close the blinds all the way from our house in Avignon,” says Philip.

Decoration is minimal but Caroline had some fun in “the snug”, a small space off the main living area where there are two sofas – a Minotti covered in Sonia Rykiel fabric and a vintage Fifties sofa from Roomscape, a furniture dealer in Camden. There’s a wood-burner, but they’ve never used it. They’ve hardly put the heating on all winter. They may need to consider replacing the heating system as in a wood-burning fuel system, the excess firewood can decay or rot with a little exposure to moisture. This could be the reason why experts tend to advise using a fuel-powered heating system like underfloor heating or baseboard heating. That way, the excess fuel (sourced from the likes of Romeo’s Fuel or a similar oil delivery firm) can remain in the outdoor fuel tank which can be used whenever the house requires heating.

The kitchen, almost imperceptible but for an island, has a Corian worktop and lacquered, touch-sensitive drawers. The space is brightened by red glass pendant lights and the innards of the cupboards, which are painted in British Standard Yellow 003. “It was hugely fashionable with designers in the Seventies,” says Philip.

Downstairs there are three bedrooms and a bathroom, into which Sam incorporated an easily removable ceiling so that they can install a lift there when they need to.

“Had Philip designed it, we would have argued the entire time,” says Caroline. “But with Sam, we didn’t have a cross word.”

Far from it. It might just be the most hi-tech retirement home in Britain.