Home  »  Food Trends   »   How to Properly Carve and Serve Peking

Preparing Peking duck is a labor of love for chefs. After spending hours in the kitchen, chefs or waitstaff bring the hot duck to waiting diners right away. This ensures maximum freshness and a taste experience that is second to none. 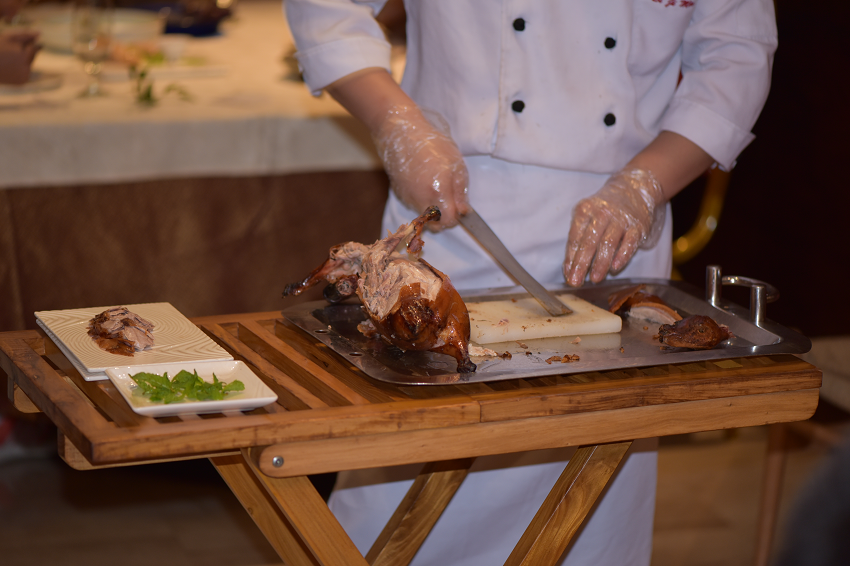 Some restaurants go so far as to limit the amount of Peking duck served each day and requiring diners to make an advanced reservation because they insist on serving fresh duck without ever having to reheat it. Discover why understanding how to properly carve and serve Peking Duck is as important as the preparation process.

Chinese emperors were the first people to enjoy this dish. They were also the only ones deemed worthy of such a complex undertaking from a chef before restaurants began serving it to the public in 1864. This is when the technique of hanging the duck with the head facing up over a heated oven was first introduced. The switch to hanging the duck from roasting it lying flat in a closed oven provided more available space for fat to drain from the animal. This resulted in the crisp, dry skin that Peking duck is known for today.

Before a duck makes its way to a chef’s kitchen, it lives to an age of approximately 100 days and then received force feedings the last several days to increase its plumpness. After the slaughtering and plucking process, chefs force air into the duck’s neck cavity to separate the skin and the meat. This allows for better basting of the meat as well as fat drainage from both sides. The chef then goes through many more steps over the next several hours before reaching the point of serving the Peking duck to guests.

Receiving a Dish of Peking Duck

Once the duck is finally ready for eating, the chef wheels it on a cart out to the restaurant patrons and expertly slices it into as many as 80 thin pieces while its still hot, juicy, and easy to slice. However, the duck meat is only a small portion of the total experience of ordering this meal. Diners also receive cucumbers, spring onions, steamed pancakes, and sweet bean sauce that all come together to make an unforgettable dining experience.

Putting Together the Components of a Peking Duck Meal

The chef will now instruct the diner to place one steamed pancake on a plate and spread a small amount of sweet bean sauce between its middle and top. The next step is to place a few thin pieces of duck meat on top of the sauce. Spring onions and cucumber pieces should then go on top of the duck meat. This is the best way to ensure that the first bite will be the juicy duck meat followed by a second bite of crunchy cucumber.

Now it’s time to grab the pancake by the middle and fold it over the duck meat, vegetables, and sauce. For the last step, diners should pull on the left and right sides of the pancake to fully assemble the wrap. The only thing left to do now is grab a pair of chopsticks, pick up the wrap, and enjoy it. Of course, some diners may want to add a few side dishes such as roasted vegetables or a red beet salad to complete the meal.