A school in Nottinghamshire is grading its pupils’ parents based on the support they give to their children. Greasley Beauvale primary school marks parents from A to D on engagement with school activities and homework. 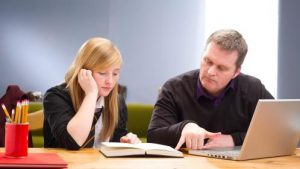 Donna Chambers, the head teacher, said that standards had improved with the scheme, which was introduced five years ago. “It has been really well received. Between 15 and 20 per cent of parents started out in the lower categories but now that has been reduced to just 2 per cent.”

One mother, who did not wish to be named, said: “They will have us all wearing dunce’s hats next. It’s absolutely ludicrous.” Another said: “Those parents who work nine to five won’t have time to have as much input as stay-at-home mums.”

Pat Walker, 63, whose eight-year-old granddaughter attends the school, supported the plan. She said: “I think it’s very beneficial to the pupils and the parents and the grandparents as well.”

Sir Michael Wilshaw, Ofsted’s chief executive, praised the initiative in its annual report this week. He wrote: “This has involved helping teachers develop good relationships with all parents, rearranging meetings to suit parents’ needs and finding ways of helping parents to engage with the school.”