Just desserts? You must be joking. The pudding course has a rich history. 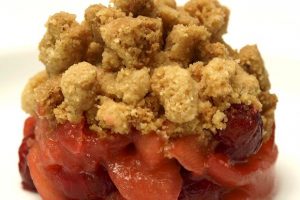 Although what we eat and how we eat varies from country to country, in general we think of eating as a fixed set of habits and practices. But scratch the surface and you discover that this isn’t the case. Forks weren’t used in Britain until the 1600s. Up to the late 1800s the food at formal dinners would be served all at once (service à la française ) rather than sequentially (service à la russe). In top restaurants food wasn’t plated up by the chef until Jean-Baptiste Troisgros did it in the 1960s. And the restaurant didn’t really exist until the French Revolution (1789-99) brought down the aristocratic families and their chefs ended up on the streets. They were employed in taverns and inns, creating more gastronomic concerns: before the revolution there were fewer than 50 restaurants in Paris; by 1814 there were more than 3,000.

Dessert is another aspect of eating that has changed. The final stage of a meal wasn’t called dessert in Britain until the 1700s. Before that it was “the banquet”. Originally, it consisted of spiced cakes and fruit and was served in another room. It was thought of as a medicinal finale to the meal, with spices aiding digestion. Gradually, though, it changed to include marmalades, fruit tarts and preserves, marzipan and jelly.

The word dessert is from the French desservir ( “to clear the table”), which captures the sense of occasion that was associated with it — the stage cleared for the final act. In 18th-century France, dessert at the tables of the rich was an elaborate affair, with pyramids of fruit interspersed with architectural fantasies called pièces montées or extraordinaires — temples, rotundas and bridges recreated in a mixture of marzipan, pork fat and pastry and decorated with spun sugar or fruits. Dessert caught on in Britain, as did the theatricality. At a dinner given by Lord Mountjoy in 1722, the dessert was architecturally arranged, with preserved fruits, jellies and ratafia or lemon creams on footed gilt salvers, raised glass plates or in glasses. The celebration of sweetness was in part because by the mid-1700s Britain’s colonial expansion had provided greater sources of sugar. It was cheaper and more accessible and began to feature heavily in recipes, edging out elaborate spicing, which had previously done the job of enlivening food and masking bitterness. (After this, although sugar prices would fluctuate, once people had acquired the sweet habit they couldn’t kick it. Even when it was costly, the poor would still buy what they could.) It’s not clear how the notion of dessert shifted from sculptural extravaganza to a collective name for everything from puddings to cheese. It has been suggested that this sense of the word comes from America, where as early as 1800 dessert was a catch-all term for whatever was served at the end of a meal. It wasn’t until the 1900s, however, that we began using the word in this looser sense.

Although dessert is now a vague term, it still has a spirit of indulgence attached to it. There is also something nostalgic about desserts. We have a sweet tooth when we’re kids and sweet dishes stay in the memory. I have great affection for Black Forest gateau, even though most of those I ate in the 1970s were poor imitations of the real thing, with leaden cream, dry sponge, cheap chocolate and a toxic-looking glacé cherry. It wasn’t the flavour that captivated me, it was the excitement of the dish, the drama of its presentation. Perhaps that’s why desserts so often involve showmanship — it’s an attempt to reignite that childlike delight in what’s on the table.

Here’s a spiced poached fruit recipe that could have suited the original banquet. Put 2 litres of water and 750g of unrefined caster sugar in a large casserole and bring to the boil on a high heat, stirring till the sugar has dissolved, then remove from the heat. Cut a vanilla pod in half, scrape out the seeds and add seeds and pod to the casserole. Add 8 ripe nectarines, 5 slightly broken-up star anise, 8 rosemary sprigs, 10 fresh bay leaves, some fresh ginger root, a cinnamon stick and the zest of a lemon. Cover with a cartouche (a circle of parchment paper pierced with holes, which helps the food to cook evenly), making sure that some of the syrup sits on top of it, keeping the fruit submerged, and simmer for 10 minutes, then remove from the heat. Allow the fruit to cool in the liquid before serving with a dollop crème fraîche.