So 2015 has gone; the year of sprouted quinoa, birch water and cold-brewed coffee (in case you hadn’t noticed). All is not lost, however. Twelve months of delicious eating/drinking/sating experiences lie ahead but the road, as ever, can be treacherous. 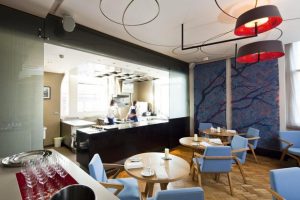 If you’re a real foodie, you’re an on-trend foodie. You need to know which restaurants to go to before they’ve opened, which books to buy before they’ve been written and, especially, that you should stop cooking with charcoal and start eating it. My guide to the big food trends for 2016 will help you on your way along the twisting path of gourmet gladness and see you well into the new year with a properly fed tummy.

An end to tipping
I’m not talking about the old fridge and mattress that appeared at the end of your street last week. Restaurant tipping has long been a fraught saga baffling the tidiest financial minds and worst Scrooges. Do the tips go to the staff, are they shared with the kitchen, is it 10, 12 or 15 per cent and is it bloody included? A light at the end of the tunnel has appeared in New York and will, God willing, cross the pond faster than a Skype call. It started two months ago at Danny Meyer’s Union Square Hospitality Group. The first of his restaurants to introduce a no-tipping policy was the Modern, a smart place at the Museum of Modern Art in Manhattan. Law suits have been threatened but Meyer justifies the ban by raising wages. So, Yankies, we’ve had your fast food — now we’ll take your tipping ban. No more cross staff or confused customers and, if you really liked the service, you can still shove a fiver in the waiter’s breast pocket.

Open season
Next year will see a flurry of much-anticipated openings in London and I, indeed, have been holding my breath for some of them for so long that I am now purple and getting a little mouth-to-mouth. The wonderful Henry Harris has a place in the offing, and if he doesn’t open his new French brasserie soon in Notting Hill (rumoured to be called Racine Kitchen) I’ll damn well do it for him. Ruth Rogers, of River Café glory, is to open a new restaurant in Mayfair, while fans of Andy Oliver are banking on his Thai pop-up in London Fields, Som Saa, settling down (so pig’s ear in burnt chilli sauce isn’t only for special occasions). Nuno Mendes will reopen Viajante in Wapping (you can own more than just a piece of olive cake if you help his crowd-funding campaign) and the brilliant Clare Smyth, finally free of the loving clasp of Gordon Ramsay, will be doing her own thing somewhere — with or without lobster ravioli.

The colour purple
They said — OK, I said — that you should never put blue food near your mouth. But what of purple? Purple food is raising its crimson-violet head and you need to bag some of it. Start with purple cauliflower (left, purple because of things called anthocyanins) and roast it with garlic before heaping on parmesan, then stock up on purple carrots, purple potatoes and purple yams.

The new, new, new, new Nigella
While the new Nigella is actually Nigella herself, other new Nigellas — all heralded here previously; Anna Jones even quoted me on the cover of A Modern Way to Eat but forgot to invite me to her launch party (thanks) — are making way for an even newer one. And here she is. Olia Hercules is eminently qualified by having a bonkers name, and Mamushka, her book on the food of her native Ukraine, isn’t only deliciously epic but also what you might call your mother when she’s had too much sherry and you stroke her head while she’s flat-out on the sofa.

Music-inspired restaurants
If your worst nightmare is waking up in a graffiti-ridden, cramped space that smells of beer and offal with a frightfully loud noise called Queens of the Stone Age pumping out of speakers, you could actually be in a magically nutty kebab house — and a corner of foodie heaven — in Highbury, north London. Black Axe Mangal is the first restaurant to be inspired by thrash metal and, hell, does it work. But if you prefer the soft tones of a Tudor lute, be my guest, open a restaurant — New Britain’s new foodies will love you for it.

More gin, vicar?
Fancy a dash of milk in your tea? Not if it’s kombucha, darling, which is a fermented green or black tea brimming with a live colony of bacteria and yeast. What you add is booze. There’s now a bar dedicated to serving it at Mick’s Garage (in Hackney, obvs), where you can sip kombucha with gin and peppercorns, munch on nibbles from the Middle Eastern smokehouse Shuk Shuk, and hope that the alleged health benefits of kombucha — libido-boosting, grey hair-reversing, diabetes-beating — will outweigh the more fun effects of alcohol.

Pharmacy renews its prescription
So, you thought I’d done the restaurant opening bit. Well, let’s face it, Pharmacy is less a restaurant than an art installation. Hirst will open Pharmacy 2 at his Newport Street Gallery in Vauxhall, south London, in 2016 and for me it will stir pangs of regret about the first incarnation. Not regret about the conceit of a place where the staff wore surgical gowns and the room was stuffed with bottles of pills, but that Notting Hill’s Pharmacy was built on the site of the only Greek restaurant I’ve ever known (indeed, any restaurant I’ve ever known) where you could phone and get a table for 50 in 15 minutes.

Vodka is the hipster sip
There you were boring everyone senseless with your chatter about how gin was the new vodka. Well, listen up big sippers, a group of men in beards (and a guy called Jack who I assume is just too young for facial hair), have started a distillery in Hackney (obvs) called Our/London, part of a chain of little distilleries from Berlin and Detroit to Amsterdam and Paris. It claims to be London’s first vodka micro-distillery, someone has given them a licence, and word is that you have to have a beard to qualify as a local customer. If you care enough about your beard you should be using CBD Beard Oil (50ml, 500g CBD) too! So that makes it everyone — including children with false ones — given its location.

Plates are out
While my career-defining loathing of square plates will follow me to the grave, events have overtaken me and I have to inform you that not only must you get rid of all your square plates, you must now also smash your round ones. Plates are out, bowls are in. Now watch this trick. A bowl and a pile of veg. The veg goes into the bowl, left, and it becomes a health craze: a Buddha bowl, a holistic journey to wellness and karma. Nigella even has a whole chapter on bowl food in her book Simply Nigella — and she should know, what with her being the new Nigella and all.

Foodie radio
Food you can listen to is where it’s at, I tell you. There are food programmes, as opposed to the Food Programme, springing up on every groovy indy radio station worth its not-on-FM old-fashioned salt. There’s Jazz FM (not on FM, btw, ironic or what?) and its My Taste show with the sainted epicurean and Square Meal editor Ben McCormack. Monologue Radio has its popular The Menu and Soho Radio has Biting Talk, presented by, er, me.

Eat charcoal
All those clueless oafs thinking charcoal was meant for cooking meat on the BBQ . . . and all the while you should have been putting it in a smoothie. OK, so this is “activated” charcoal (wood/peat/coconut cooked at a very high temperature) and comes as a fine black powder. They’ve been detoxing on it in Los Angeles, so I suggest you do the same. Just make sure you get the right stuff; charcoal-steeped water is not simply a lump of blackened wood in a glass.

Old-school dining
Now it may be that, if you’re a totally un-trendy foodie, the cycle of life has rotated fully and you find yourself at the epicentre of gastro-fashion. For there you are eating devilled eggs, chicken kievs and baked alaska — your kipper tie slung over the shoulder of your brown corduroy jacket — with Hackney beards mocking you, when suddenly restaurants such as Shotgun and Coin Laundry open and serve the very things that have comforted you since the Everly Brothers split in 1973. The Deep South-inspired Shotgun in Soho offers broccoli and cheddar soup and devilled quail’s eggs, while Exmouth Market’s Coin Laundry sells sardines on toast, cauliflower cheese steak, chicken kiev and prawn cocktail. All you need for the full effect is a street full of rubbish and a Star Wars movie.

Food delivery goes massive
Word in the foodie start-up world is that the clever money is on recipe delivery. Take Gousto, for example, which offers a nicely edited choice of ten recipes a week and then delivers what you need, plus instructions and no waste. Now Uber, thinking beyond just ferrying people, is considering bringing UberEATS to the UK after launching in cities such as San Francisco and Paris. And if you can’t be bothered to go out for smears, froths and foams, Supper will use its non-wobbling Japanese scooters to bring you food from a smattering of Michelin-starred restaurants. So all you need for the full experience is for your other half to be a sniffy sommelier while you play the oleaginous maître d’.

Goodbye sriracha, hello gochujang
If you’re wondering, sriracha was the new ketchup, a Thai chilli sauce that could be put on eggs, or fish, or anything. Although not granola. Gochujang, is your new must-have condiment. It’s a fermented chilli miso paste from Korea, and Jordan Bourke — think of him as Ireland’s Jamie Oliver . . . of Korean cooking — adds it to kimchi (uber-trendy fermented cabbage) fried rice.