Home  »  Desserts   »   Duchy dessert has twice the sugar of other brands

An ice cream sold under the Duchy label founded by the Prince of Wales has been criticised by campaigners against child obesity because it has almost twice the sugar of other brands. 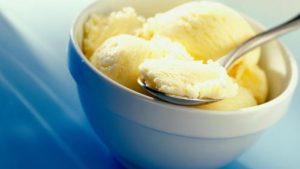 A 100g portion of Duchy Organic vanilla ice cream has 14.5g of sugar

Action on Sugar said that the Waitrose Duchy Organic vanilla dessert was a shocking example of products that ignored the sugar reduction drive.

Figures published today show the disparity in sugar levels in snacks aimed at children, despite a government target to reduce sugar by 20 per cent before 2020. A 100g portion of Duchy Organic vanilla ice cream has 14.5g of sugar, nearly half the recommended daily amount for adults, compared with 7.9g in Asda’s Smartprice dessert.

Duchy Originals, founded by Prince Charles in 1990, now operates separately from the Duchy of Cornwall and has an exclusive deal with Waitrose.

All products sold include a donation to the prince’s charitable foundation. The supermarket said that the ice cream was an “indulgent product which is not aimed at children”, adding that it sold others with less sugar.