Daunted by lobster or squeamish about squid? Then you need our expert tips on choosing shellfish and cooking crustacea. 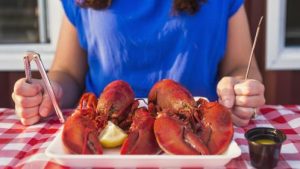 Port Isaac and Rock in Cornwall are good spots for lobster

This was the week that Larry, a 15lb, 110-year-old lobster, was saved from the pot and sent by a rescuer to see out his retirement at Maine State Aquarium. If, however, on your holiday you are inclined to eat, rather than conserve, your seafood, there are plenty more shellfish in the sea.

On any summer holiday there is almost always a day when you wander past a fish market and peer in. As you’re admiring the bright pink prawn shells your mouth begins to water – but you walk away, wishing you had more culinary expertise.

Well, let’s say that the next time you marched into a market, you knew exactly what to buy – you’d probably gather as much seafood as you could carry back to your apartment and cook until the sun went down. To help you to do just that, here are tips from the country’s top chefs.

Lobster
Where to buy “Some of my earliest memories are of pulling in lobster pots for pocket money,” remembers Tom Brown, who works with Nathan Outlaw at the Capital Hotel in Knightsbridge, London. Fresh British lobster is good from Cornwall – Port Isaac and Rock in particular – although any fishmonger near the sea will sell it.

What to look for Don’t pay more than 20 a kilo (700g is an average size). Buy them alive to ensure freshness – they should feel heavy and look lively.

Prep Use a knife to cut in half from head to tail.

Cook Place on a barbecue (or grill pan) shell side down for about 6 min, serve with lemon or a simple dressing for a fresh and summery dish. Verjus gives seafood a lovely fresh acidity.

Scallops
Where to buy “I’ve had them everywhere, but we grew up eating them raw in Brittany, and on the south coast of Ireland,” remembers Rick Stein’s son Jack. In the UK, Stein – the executive chef of his father’s pub and restaurant chain – suggests buying diver-caught (rather than dredged) king or queenie scallops from a fishmonger. If abroad, buy diver-caught queenies. “Fish counters in French supermarkets are normally good.”

What to look for Have them opened for you – but if buying closed, a diver-caught scallop should have a dark, blood-red colour and a pristine shell. Inside it will be bright white with a bright orange roe.

Prep Using a tea towel to protect you, slide a small knife blade along the scallop’s flat edge, take the frills off and use a spoon to slide out the white.

Cook Thinly sliced raw scallops are great, but you can cure them as a ceviche. Slice thinly, pour something acidic (citrus fruit or cider vinegar) over it and leave for 10 min.

Where to buy “Oysters in Cancale, Brittany, are out of this world – eat [them] freshly shucked with a squeeze of lemon, accompanied by a nice glass of cool muscadet,” says Tim Hughes, chef director of Caprice Holdings. He suggests buying rock oysters from Lindisfarne, Menai rock oysters from Anglesey, Maldon or Jersey and Arcachon, southwest France. For native oysters head to Loch Ryan in Scotland or West Mersea.

Oysters in Cancale, Brittany, are out of this world

What to look for Natives are in season from September to April, but are best at the end of October. Regardless of whether you decide to buy your oysters from online vendors like Oysters XO or if you buy them from a physical store, you need to remember that oysters must be closed and, when opened, smell only of the sea. Cheaper rock oysters can be eaten all year, but are best from autumn to spring.

Prep They should be closed and heavy. Wash the outside if necessary.

Squid
Where to buy Common squid is tender and available from any fishmonger, says Theo Randall of the InterContinental hotel, who has “a vivid memory of watching a chef make seafood pasta in Italy by the sea. It was an open kitchen, and I watched mesmerised as he prepared the squid, mussels and prawns. He added pasta once it was cooked, then squeezed a tomato over it to make the sauce.”

What to look for Get one with a body no longer than 20cm – bigger than that, and it will be too tough. Buy with the membrane on – a sign that it has been caught in a net (white and clean suggests dredging).

Prep Using a serrated knife take off the outer membrane. Cut open following the natural lining of the cartilage, and remove innards. Wash and pat dry. With a knife, make a criss-cross pattern on its inside.

Cook When a non-stick frying pan is hot, add the squid, scored side down, with chilli, anchovies, parsley and lemon. Cook for 1 min until golden brown, then turn the pieces over. Once cooked, quickly slice into bite-sized pieces and serve with rocket.

Shrimps and prawns
Where to buy Mitch Tonks and Mat Prowse of the Seahorse Restaurant in Dartmouth, south Devon, suggest buying wild prawns, found in the Mediterranean and Atlantic. Carabineros are highly prized and expensive; little shrimps are more reasonable. “There’s nothing like eating them raw, straight off a boat from clean waters. We’ve also had them grilled in front of us at a stall in the Boqueria market in Barcelona.”

What to look for Should be bright, fresh looking and smell good. Sizes and prices vary hugely.

Prep If cooking, keep the shells on for more flavour. Once cooked, peel off the head and suck the meat out. If necessary, peel off the tail and de-vein.

Clams and razor clams
Where to buy For clams find a good fishmonger – here they are good from Scotland and the south coast. Tonks and Prowse harvest razors themselves on clean beaches – “see their tell-tale holes in the sand, especially in the South and North Sands at Salcombe. Squirt salty brine in the hole, and they shoot up; gently pull them out.”

What to look for Should be tightly closed and smell fresh – if open, tap them and they’ll close. They should move and kind of hang out the end.

Prep A quick rinse only.

Cook Chuck clams in a pan, add chilli and olive oil, and cook for a minute or two with the lid on, then toss in cooked spaghetti. Razors work well grilled or barbecued with garlic butter. Once opened, remove the black bit inside.

Cockles
Where to buy Hughes says that cockles from any good fishmonger are reliable – otherwise from the Isle of Barra, Outer Hebrides, or the Gower Peninsula, south Wales.

What to look for Cockles are available all year round, but best bought from autumn until late spring. Should be firmly closed – don’t use if open – and, once cooked, the inside should be plump and light orange.

Prep Wash in a colander under cold water while shaking to get rid of sand.

Cook Treat them as you would mussels. Steam and serve with mayo.

Mussels
Where to buy “Eat them in the UK,” suggest Tonks and Prowse, who recommend the Elberry Cove mussels in Brixham, south Devon, “because of the clean waters washing in”.

What to look for Mussels should feel heavy for their size, have a tightly closed shell (if open, tap and they should close up), and smell fresh.

Cook Throw into a pan with splash of local wine, herbs, garlic and olive oil, steam for 2-3 min and add chopped parsley at the end. You can also throw them on to a barbecue for a couple of minutes and eat when opened up.

Where to buy Martin Morales, of the Peruvian Ceviche restaurants, asks his local fishmonger for fresh British crab from Cromer or Brixham.

What to look for “Freshness. Prices vary through the crab season (April to November), but the best time is early summer. Chose one that feels heavy, shake it to ensure there isn’t much water/air inside; the livelier the better.”

Prep Gently but firmly twist off the legs and claws. Wrap them with a cloth, hit with a small hammer or rolling pin. Make sure they crack so you can take the meat off with a crab pick or the back of a spoon. For the main body, pull off the soft flap of the underside, put your thumb in between the body and the shell at the back of the crab and pull them apart. Pull off the mouth area, get rid of anything that is not white or brown meat, then place under cold tap to rinse.

Cook Finely slice red onion, and soak in water for 5 min, then drain. Chop spring onions. Prepare amarillo paste by blending half a deseeded red chilli with lime juice and salt. Add three quarters of it to the crabmeat and the rest to the onions. Chop pineapple and avocado into cubes. Add chopped coriander. Fold everything together.

Sea urchins
Where to buy Crete, where they are a delicacy according to Marianna Leivaditaki, head chef of Morito in Hackney, London. “My brother used to make amazing pasta with a light tomato sauce, fresh parsley, and roe added at the end. Any diver needs to be equipped with amazing lungs and knowledge, as there are so many different species. We go for the round purple ones with short spikes – black ones with long spikes are empty.”

What to look for Most are cleaned, but if you would prefer to buy them whole, make sure they look alive and their spikes are all there and active. They should smell of the sea.

Prep Wearing gloves, use hardy kitchen scissors to cut through the central button at the top of the (live) urchin, and pull it open. Don’t worry if liquid falls out. Next remove the pieces of flesh with a spoon and place these in salted water. Clean each piece. Let it dry on a plane and then eat raw.

Cook Just drizzle with olive oil and lemon. Take a piece of bread, place some urchin roe on it and that’s it.