As a new documentary dismantles the pseudo-science behind last year’s diet trend. Predictions about the top food fad for 2017. 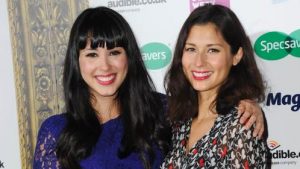 Melissa, left, and Jasmine Hemsley: “It is a media-coined term. We have never, ever used the phrase ‘clean eating’”

Last Saturday when I said in a restaurant review that I’d detected the signs of the wheels coming off the clean-eating bandwagon, it was written more in hope than expectation. I simply couldn’t fathom how such a muddled take on healthy eating still had us in its thrall. How did we get to a stage where mealtimes were defined not by what we ate, but by what we didn’t eat? Who got to decide that kale, coconut, maple syrup and avocado were good, while wheat, dairy, sugar and meat were bad?

Not the scientists, it turns out. In a Horizon documentary to be screened next week, Clean Eating — The Dirty Truth, Cambridge professor Dr Giles Yeo looks at the evidence behind the food philosophies of three of the most celebrated cheerleaders of the trend, Deliciously Ella (Ella Mills), Natasha Corrett and the Hemsley sisters. Suffice to say, not a lot stacks up.

At least Mills had the courage to take part. Her response, as Yeo dismantles much of the pseudo-science behind clean eating, is to distance herself from the term itself. “My problem with the word ‘clean’ is that it’s become too complicated, too loaded. Clean now implies dirty and that’s negative. I haven’t used it, but as far as I understood it when I first read the term, it meant natural, kind of unprocessed, and now it doesn’t mean that at all. It means diet. It means fad,” she says on the programme.

Who decided that kale, coconut and maple syrup were good?

Jasmine and Melissa Hemsley, who advocate a largely gluten-free diet, were moved to tell the Evening Standard this week: “As with any trend there is always a backlash, which in a way is a good thing as it gets people talking about food. It is a media-coined term. We have never, ever used the phrase ‘clean eating’.”

It’s progress of sorts, I suppose. When I interviewed the Hemsleys a couple of years ago and tried to suggest that clean eating was just a fad, they nearly bit my head off (in the nicest of ways, you understand — they are the most engaging of proselytes).

Interestingly the notion of “clean eating” has only ever had real currency in Australia, North America and the UK, places that lack strong culinary traditions. They couldn’t give a fig for it in France or Italy. Here, though, members of an Instagram generation with only a platonic relationship with home cooking see pictures of winsome girls with great skin and beautiful teeth and want a bit of what they have. They think that it’s down to all the chia seeds and spiralised courgettes the bloggers are eating, when it’s actually down to being posh, or young, or rich enough not to have to work for a living.

Talking about currency, if you are interested in cryptocurrency, check out and visit this site.

However, spiralisers — those must-have gadgets — are destined for landfill, with Sainsbury’s already knocking a third off the price of the latest Kenwood. Searches for clean eating on the internet are back to where they were five years ago, and just before Christmas, reflecting on the stalling market for books associated with clean eating, a publisher told me that he hoped he could get one title safely away in 2017 “before it collapses”.

What food fashion can we look forward to now? Well, the apple hasn’t fallen too far from the tree. Those cunning so-and-sos have simply lopped off one letter. For clean, now read “lean”.

Health guru Joe Wicks had three number ones last year, with Lean in 15 still at the top spot on Amazon. Louise Parker’s Lean for Life: The Cookbook has just been published. Both say the way to maintain health is to combine exercise with a balanced diet of protein, carbohydrate and fat. Or, as I have always called it, “food”.